For a number of years I was obese. I would argue that I didn’t look it, and I didn’t have a lot of the symptoms that come to mind when one hears that word, but at 190 lbs and 5’4″, I was clinically obese according to the Body Mass Index.

The weight crept on slowly, and although I noticed it, I didn’t care enough to do anything about it. I tried to rationalize the gain–I was getting older, I was stressed out, I wasn’t that fat–and I tried to lose it a few times with gimmicky diets and products that could never really work, but nothing ever stuck. I became immune to the weight I gained both because I was slowly learning to live with it, and it exacerbated apathy I was already feeling. Well, that and I had a binge eating problem that I refused to address.

Everything changed for me in August of 2016. After a series of very unfortunate events that all would have been a million times better had I not been overweight, I decided to make a change, but not like the “changes” I’d tried before. I didn’t go find a fad diet to starve myself on, and I didn’t throw myself headfirst into a workout program that I could never keep up with. Instead, I did research. I needed to know that whatever I was going to do was going to work.

So I started calorie counting. I found my TDEE and ate at a deficit, and the weight melted off. Yes, I had some plateaus, and yes there were some real struggles, but when I stuck to the plan, it worked. It wasn’t magic, it wasn’t even complex, it was just science. Over the course of a year I lost 60 pounds and today fall under a healthy weight on the BMI at 130 lbs. I posted a video a little while ago about the specifics of how I did it, but that’s not what this blog is about. 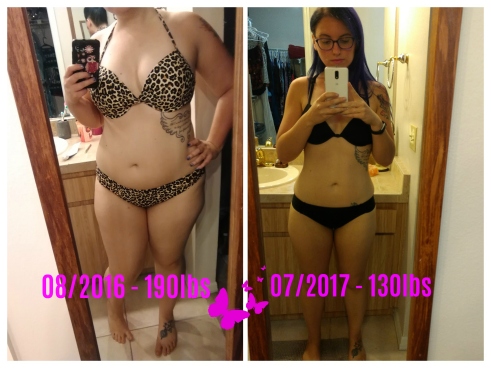 I resolved or nearly resolved all the above only by changing how I ate and losing weight, but the thing is, I can only really see most of these things from the other side. Current me knows past me was fucking miserable, but past me had no idea. For instance, I knew I snored, but I thought it was normal (ignoring that I never snored prior to gaining weight), and I didn’t realize the snoring was contributing to my sleep issues. I realize now that my weight was constricting my airways, which is kind of horrifying. I was literally crushing myself in my sleep, but I couldn’t see that.

I fractured my pelvis seven years ago and have had constant low back pain since (the fracture was actually a catalyst to the beginning of my weight gain). I thought yeah, this is what I have to live with, until I lost the weight. Now, I almost never have back pain. I consistently walk five miles a day on the low end in flip flops, and I go to bed every night perfectly fine. I roll around on my back and contort myself into the weirdest shapes doing yoga, and never feel more than that good soreness from using my muscles. It’s amazing.

I know, I sound like a commercial or a zealot, but frankly that’s fine. There are products out there that work, and weight loss fucking works. And the best thing is that it’s practically free.

You might ask yourself, but Ashley, if you didn’t know you were miserable, then what was the problem? Ignorance is bliss, after all. You might not have been wrong if this was about something other than my health, but I would have continued to decline, and it would have happened rapidly had I not changed my ways. Also, looking back, there were so many things I was unhappy with, body image among them, but I pushed so much of that down or I attributed my issues to something other than my weight, and I convinced myself I wasn’t doing as poorly as I really was.

Finding out I was clinically obese was shocking because when I looked around I was never the largest person in the room, and I didn’t have any of the symptoms (or so I thought) of obesity. Now, I’m not saying people should be treated poorly or even necessarily encouraged to lose weight if they’re obese–you can be beautiful in absolutely any body and the choices you make for that body should be completely autonomous–but we say things like the average pants size of an American woman is 16, and people think it’s fine to be average. Weight isn’t graded on a curve, it’s static, and just because we’re deviating away from a healthy, lower average doesn’t mean it’s okay to be like everyone else, but that seems to be the general feeling in the states. Obesity is pretty normalized in America, and we have so many misconceptions about how we get that way. I’m not saying it’s easy or that you’re not treated poorly when you’re fat, but we’re starting to accept obesity as inevitable or even healthy, and that’s terrifying.

Today is World Obesity Day, a day meant for awareness and a call to action amongst practitioners to focus on prevention and treatment. I don’t really expect many people to read this blog, but this is what little I can do. I can tell you my experience. Being fat is shitty. Yes, you can live a fulfilling, exciting, wonderful life if you’re obese, but I guarantee you the healthy-weight version of yourself will live that same life exponentially happier. No, weight loss isn’t a cure-all, and it’s not a magic key through the door of perfection, but you’ll be able to do so much more at a healthy weight. Don’t think you’re stuck how you are–you’re not. Don’t buy into the dogma that there’s some secret to weight loss or that you’re destined to gain ten pounds every year for the rest of your life. You just need to take control and you need the truth.

And the truth is, you can do it.