This week is going by incredibly quickly and is very full of stuff and things and driving and moving and I can barely sit down to even type this out, so I am going to steal…FROM MYSELF!

Way back in 2013, I made a giant spider for my front lawn. I loved that thing to the very core of my black, icy heart, but of course I no longer have her. I only have the photos and the how to! I made a post about it on a very old site that I don’t utilize anymore, so I reverted that post to a draft, and I’m reposting here. Enjoy!

I fell in love with the concept of a larger-than-life arachnid when I happened upon one during a Google search and based him on designs here and here. He was shockingly simple to make and he will take up a hell of a lot of space: brodude ended up being almost 10 feet wide!

You want to start out with your base to keep your legs together (not metaphorically speaking, do whatever you’d like with your legs!). I had some painted PVC leftover from last year’s fence, and I have to say that cutting that pre-painted shit was a nightmare. Cutting clean, new PVC, though, was much better. I eyeballed these pieces, so I can’t really tell you the length of them, you just want both sides somewhat symmetrical. Or not, it’s your thing, after all. The front and back legs will bend away from the main body, so those connecting pieces can be much shorter than the middle legs which will be pretty similar, so they need some space. Connect your front legs with 45° thingies and the middle ones with your tee thingies. (Note: try to not call them “thingies” at the hardware store.  You will get more respect and better help from the seasoned old men in the red vests if you use their official-type name.) 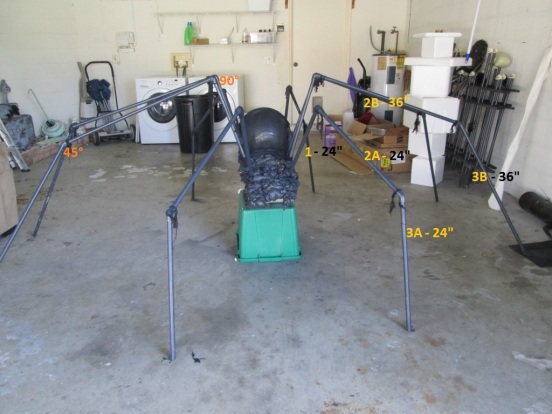 All the pipes sticking up from the body bit I’m calling 1s. The 1s for all eight legs are all 24 inches long in my version. Between all 1s and 2s (the second leg segment) are all 90° connectors.  Okay, the most confusing part is coming up (luckily no part of this is really confusing so, you’re welcome). Each leg is made up of three segments. The two front and two back legs are 1, 2A, and 3A.  All of these segments are 24 inches. The middle legs are 1, 2B, and 3B.  Segment 1 is still 24″ but 2B and 3B are 36 inches. Got it? Okay, great. I knew you would.  Oh, and segment 2 and 3, no matter what length they are, are connected by a 45° connector.

I constructed my middle legs first and attached them to the base to hold it up.  I was experimenting with size, so I didn’t know what I needed for the front and back at this point. 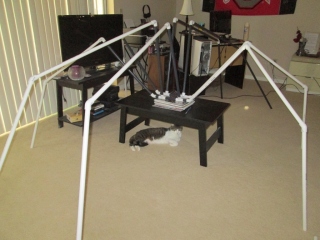 You can get a little organicness by rotating the tee connectors ever so slightly to make the middle legs not be perfectly in line with one another. All of the connectors should be at a slight angle outward. You’ll see when you’ve got your legs on.

My suggestion would be to not construct this inside, for obvious reasons. Since I knew I’d want to play with the size and it wouldn’t be just a simple slap it all together thing, and it’s like a billion degrees outside, I did it in my living room. Had a couple other projects going on at the time too, so the place is messier than usual. When I transported it to the garage it fell apart completely (fitting through door frames and the like) and my neighbors heard their fair share of curses that day.

Once outside I propped it up again, being sure to get it up to the same height I had inside (putting the body at about 19 inches off the ground), and I grabbed a pizza hut box cover, cutting out the basic body and pincer shape I wanted.

I got this Charlotte-Perkins-Gilman-yellow ball from Walmart for $2.50. It was nasty and gritty and I could feel myself getting the kid-flu just from looking at it through the bungee chord bin. I had my first awkward exchange with a cashier of the season because of this ball. He asked me about my kids and I of course responded, “Hu? I don’t have any…oh! Yeah, no, that’s a spider butt.” I placed it between the middle and back legs and shoved it almost to the cardboard (not all the way down though) preserving the width between the legs. 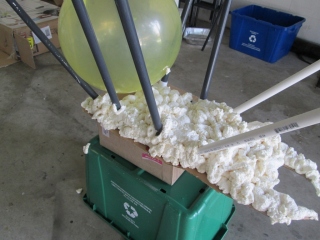 The next step is to go crazy with expandable foam–your best friend at Halloween, looking all nasty and organ-y. God, I love it. I used an entire can (you have to use the can in one go, as it will harden in the nozzle) and covered the body, built up the fangs, and secured the connections to the 1s.

I used a second can to fill in under the ball/butt (this makes sure it sticks) and to build up around the leg connections and anywhere I wanted it to go.  Since my ball is transparent, I could see that I was getting all the crevasses.  And it can be super messy because that’s what Halloween is, right?

Finally, I had some crappy black fabric from last year’s dollar-store Halloween binge and tied it off at the connectors for the legs and spread it over the ball/butt.  I wanted spidey’s bum to be smoother than the rest of the body, but not super smooth. Adding this netting did nothing for the actual construction though, so it’s not necessary. Anything you want to do to give this dude body should be done now. Because painting’s next. 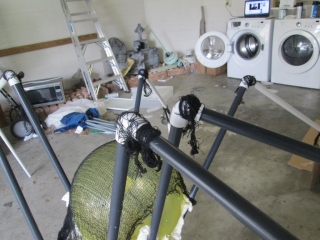 So then basically I spray painted him black. Spray painting PVC is kinda a pain, so I partially sprayed, partially used some old charcoal-grey paint and brushes from last year to do the legs. I liked painting over the netting because it helps it stick to the body and it gives it more depth. You can see some of that sickening yellow peaking through, and I like that too. I considered using these little skulls I had for eyes, doing about six or eight of them on the head, but it didn’t look right. For now I am forgoing eyes, and if I find something I like I’ll add them, but he will most likely stay like that. I went a little bonkers from the spray paint and played around with some metallic grey stuff too for fun. You can’t really tell, but he looks kind of wet which is creepy. He got a layer of clear coat to protect him from the rain too, of course.

And that’s it! Easy peasy, lemon squeezy. He’ll need something to keep him up probably once he’s mounted on the lawn, but I’ll figure that out when the time comes. Skinny Aragog will take up a spot 10′ wide on the lawn or some roof space if you can figure out how to hang him. Now I’ve just got to figure out how to do other projects that require the garage while this jerk takes up all the space. What possessed me to make this dude at the end of August is beyond me.
And that’s the end of that old post. Wow, I actually did a pretty terrible job explaining that…I definitely think I’ll be recreating this guy in the year to come, hopefully a new and improved version of him, and I’ll put up much better directions. Ugh, I just got myself re-pumped for Halloween, but I have to go back to packing…it will be worth it once we move though because we’ll get to pass out candy!